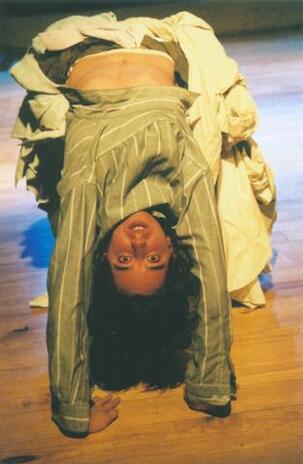 Amelia O'Dowd weaves her effervescent wit and her extreme tactile awareness into her brazen, textually based creations. Having first studied sculpture, painting, ceramics, fiber arts, and performance art at Mass. College of Art and at Walnut Hill School, she brings an unorthodox perspective to the dance theater world. As a founding member of Monkeyhouse, she has performed in Philadelphia, Winnipeg, Minneapolis, NYC, San Francisco, and Boston. In 1999 her guerilla performance piece, Colony: Blue was performed on the sidewalks of the Fenway section of Boston and her Duet: Blue was included in Sidewalk Sam's Art Street Festival. Her sculptural dolls were featured in the A.I.R. Gallery's Generations 2: a Survey of Women Artists at the Millennium in New York. She has also worked with Jonas dos Santos, a Brazilian conceptual performance artist while teaching art classes at Myhelan in New Jersey.

Amelia is now the owner of Brim on Fifth in Dayton, Ohio.